The main difference between IPv4 and IPv6 is that IPv4 is the fourth version of IP established in the 1980s. It currently makes up over 90% of internet traffic and can only support 4.19 billion addresses.

IPv6 on the other side is newer, faster, more secure, and can support many trillions more addresses. But is also yet to start getting used on a scale. 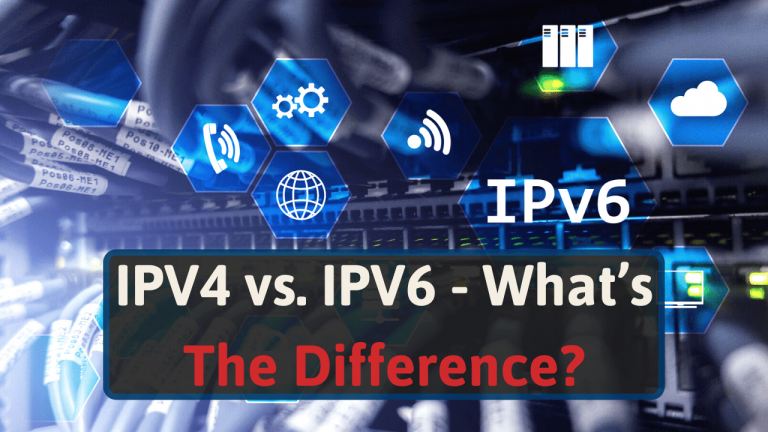 I’ve done hours of research about IPv4 and IPv6, so you don’t have to.

Read on, as I explain each IP version and how they differ from each other.

The Main Differences Between IPv4 and IPv6

IPv4 and IPv6 are both Internet Protocols addresses. Networks use them for the identification of any machine that connects to them. They perform the same basic tasks but do so in different means.

For example, they have different addressing methods, network configurations, mapping, and speeds.

Here are the major differences between IPv4 and IPv6:

What is an Internet Protocol Address?

IP (Internet Protocol) addresses allow all computers to communicate over the internet.

It is the most critical communication protocol. IP routes and addresses information packets for networking devices across networks. These devices include computers, laptops, etc.

IPv4 is a core protocol of packet-switched networks, including the internet. It was first deployed in the early 1980s and still routes most Internet traffic today.

IPv4 makes it possible for our computers and other devices to connect to the Internet.

It is the backbone of the Internet and enables internetworking by using a logical addressing system. It also performs routing.

This means it forwards packets from the host source along other routers. Then, the final destination host on another router.

It uses a 32-bit address and thus has over 4.2 billion unique addresses.

When a device connects to the Internet with IPv4 it gets its unique IP address (192.158.111.55, for example) – this is the device’s unique identifier.

While 4.2 billion unique addresses may sound like a lot, they can all get used up. Especially with the growing number of Internet-capable devices. One reason engineers developed  IPv6 was to fill in the gap with more Internet addresses.

While IPv4 is the older Internet Protocol, it certainly isn’t past its prime. As we mentioned already, over 90% of internet traffic happens through IPv4.

Besides its extensive usage, it has many more benefits:

Internet Protocol version 6 (IPv6) was started in 1999 to address the concern of IP address demand exceeding the amount of IPv4 address available (4.2 billion).

Even though the plan was to eventually phase out IPv4 and fully replace it with IPv6, they will likely both be around for quite some time since billions of devices already support iPv4.

The increased number of available IP addresses isn’t the only benefit IPv6 brings to the table. It has many other markable improvements, including

IPv4 and IPv6 currently coexist. Many newer devices are capable of communicating and addressing with both IP versions.

Now that we know about the features, advantages, and differences of each, let’s compare them. We look at each from a speed, configuration, and security perspective.

Yet, IPv6 has the capability of being faster the faster IP since it doesn’t use NAT. On the other hand, IPv6 transfers larger packets, making it slower.

Since IPv4 has been around so long, it is better optimized, making it a great contender to IPv6.

In the future, IPv6 networks will likely be better. They will get faster with tuning, have better optimization, and achieve other improvements.

IPv4 uses DHCP or manual configuration to add IP addresses to a network. DHCP stands for Dynamic Host Configuration Protocol. It is automated and works great.

But, when you need to use manual configuration, it could lead to frustrations and issues.

IPv4 and IPv6 can both have excellent security (especially when you keep up with updates). IPv6 requires Internet Protocol Security (IPSec) but is optional for IPv4.

IPv6 has end-to-end encryption and a more secure name resolution. This makes it a more difficult target of network attacks.

But, a properly configured IPv4 network can be as secure or more secure than an IPv6 network. That is if network providers and end-users use IPSec and put in place new updates.

IPv4 and IPv6 are coexisting Internet Protocols. They allow addressing and communication of devices over networks. IPv4 is older and is still used by over 90% of devices worldwide.

IPv6 is newer and can handle more addresses. It has the potential for better security, faster speed, and easier configuration.