What is a Network Switch & How Does it Work? 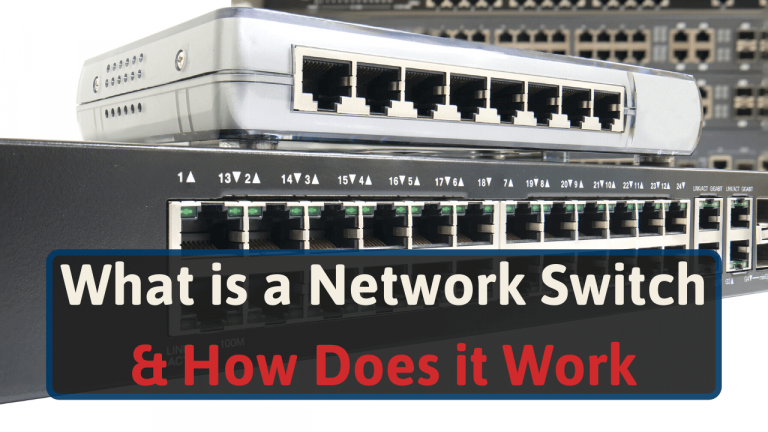 I’ve done hours of research about switches, so you don’t have to.

Read on, as I will explain what a network switch is, how it works, and how you can set up a switch on your network.

What is a Network Switch?

Network switches connect many devices to a network to share information. Devices may include computers, printers, wireless access points, and more.

Switches send data only to a single device that requests it. Instead of sending it to the entire network, which is what a network hub does.

Network switches “split” network traffic to each device connected to it. For example, let’s say you connect a network switch to your router and two computers to the network switch.

In this example, the network switch routes the network traffic. It sends packets to each computer from the router (and the internet). So, traffic for computer one only goes to computer one instead of all the traffic going to both computers.

How Does a Network Switch Work?

Network switches provide data packets to devices on a LAN. They use Media Access Control (MAC) addresses to communicate.

When you connect a device to a network switch, the switch notes the device’s MAC address.

The switch uses the MAC as an identification of which data packets it is sending and receiving.

Each connected device sends data packets. The network switch reads the header of each packet (with the MAC address). The switch sends the packet to the matching destination device.

Think of the network switch as an air traffic controller. It tells the packets exactly where to go to avoid collisions and congestion.

Using a router would be like having a conversation in a loud, bustling bar. It’s harder to hear and process the information.

There are many types of network switches available. Here are the top ones.

Managed network switches provide the best security, features, and flexibility for your network. [1]

You have greater customizations available to you. This allows for a better quality of service for everyone accessing your network.

Unmanaged network switches have a simple installation and setup. They are for basic connectivity. You can plug-in devices in unmanaged switches without configuration.

They are great options for home networks and other situations where you just need a few ports. But, they do have less security and features than managed switches.

Network hubs are central connection points for devices on a LAN. One drawback of network hubs is their bandwidth limit. This is because all devices on the hub share the total bandwidth of the hub.

As such, with more devices connected and active, the slower the data transfer. This is unlike network switches which have dedicated bandwidth for each device.

All network switches are either a layer 2 or layer 3 switches, and some can be both.

Most network switches are layer 2 switches. They connect to each device’s physical ethernet ports on the switch with an ethernet cable.

Network switches and routers are not the same. Routers usually operate on layer 3 (with IP addresses). They connect networks to other networks.

Switches use layer 2 and connect local devices to one another. For example, they transfer packets from a router to a computer or a computer to a printer.

Some routers have built-in switches. They function as both a router and network switch.

Network switches use Media Access Control (MAC) addresses. With MAC addresses, they send Intenet traffic to the intended devices. They are not part of internet traffic. MAC addresses are permanent and never change, much like your Social Security Number. [2]

But, routers use Internet Protocol (IP) addresses to connect devices to the internet. IP addresses act as the mailing address for the device. But IP addresses often change (unlike your physical address).

How to Setup a Network Switch with Your Router

Network switches are one of the core building blocks for networks. They connect various devices on your LAN together. They work with MAC addresses.

Switches provide one-on-one communication between devices on the same network.

Remember, network switches are different from routers. If you’d like to learn more about routers and how they work, check out our guide here.