What is Bluetooth & How It Work

Bluetooth is the technology that allows electronic devices to communicate with each other directly. It uses radio waves that are both transmitted and received by the devices in connection with each other. 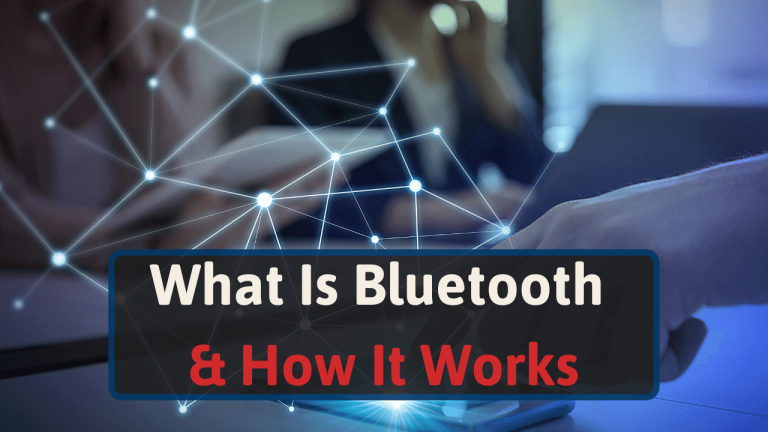 Bluetooth is something that has changed a lot over my years as a network engineer, and what it is today is very different from what it was 10 years ago.

I will now explain what Bluetooth is and how it works, so keep reading.

Or in more simple words. Bluetooth is the technology that allows for communication between electronic devices.

Bluetooth is mostly used for connecting things like wireless headphones to your phone or a wireless mouse to a computer. It should also not be confused with a Wi-Fi signal. [1]

The difference between Wi-Fi and Bluetooth is that Wi-Fi is much stronger and comes from your router. And even if devices can connect with each other through Wi-Fi it’s not the same as Bluetooth.

This is because Bluetooth is a direct connection between the devices while Wi-Fi uses the router as an interlink.

Bluetooth uses a band of 79 different frequencies (channels) which range from 2,4-2,485 GHz. This frequency interval is shared with industrial, scientific, and medical gadgets. [2]

But this won’t be a problem for you when you use Bluetooth. This is because the class 2 type Bluetooth that exists in consumer devices such as phones and computers only have a range of around 10 m.

Other types of Bluetooth are class 1 and 3. Class 1 is used in industry and has a range of around 100m and class 3 is rarely used because of its short range of 1 m.  [3]

Furthermore, the Bluetooth signal is not just one frequency. It can change its frequency, as much as 1600 times every second. This is to keep the signal strength and minimize interference in radio crowded areas.

A Bluetooth network is called a piconet and uses a master/slave system to control the data flow.

In this system, one “master” device (often a phone or a computer) can connect to up to seven other devices. These will get the role of slaves (slave devices are often wireless earphones, mice, or keyboards). Slave devices can only connect to one master at a time. [4] 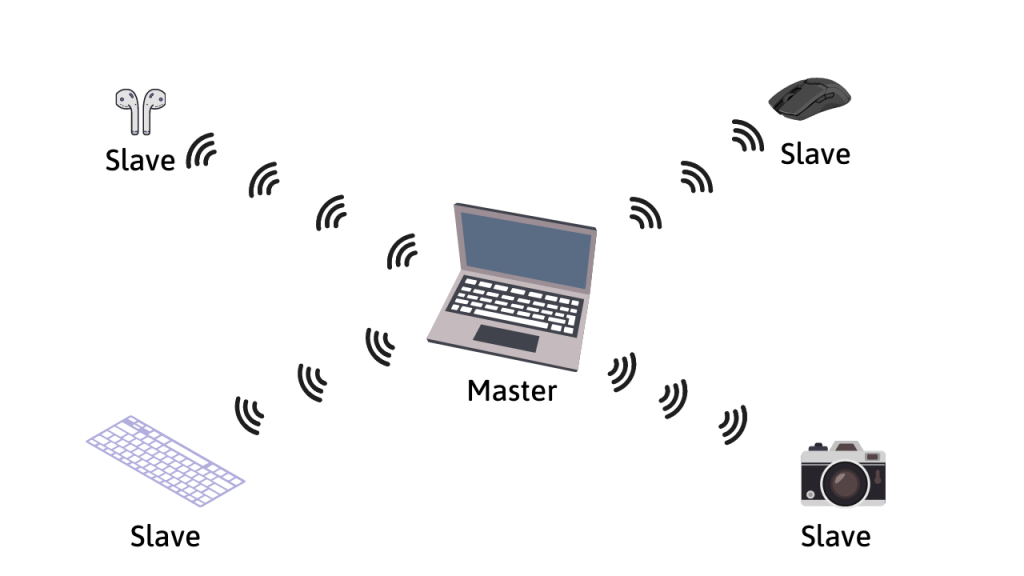 The master’s role is to coordinate data transfer in the piconet (Bluetooth network). It can send or request data from any of its slaves. In addition, slaves are not allowed to communicate with each other in the piconet.

Every electronic device with Bluetooth has a different address. This is important because in a house there are often a lot of devices that use Bluetooth to communicate with each other.

An address makes it possible for the device to know if a Bluetooth signal is meant for it or not.

There are three steps in the connection process between two devices that establish a Bluetooth connection. These steps are:

Device bonding is when two devices remember each other. Bonded devices automatically establish a connection with each other if they are in range. An example is a car, which often connects with your mobile when you start it.

To create these bonds the devices go through a process called pairing. During pairing the two devices usually follow the normal connection process.

But instead of forgetting the device when they disconnect from each other. The devices’ data gets stored in memory. Furthermore, they also save a shared secret code that allows them to reconnect with each other in the future.

The name Bluetooth comes from the Danish king Harald Blåtand. He was king in the 900s and is most known for uniting Denmark and part of Norway into a kingdom. His name Blåtand is directly translated to Bluetooth. The belief is that he got this name from a rotten tooth that appeared blue.

The reason Bluetooth is named after him was that he united Denmark and Norwegian. Just like Bluetooth unites devices with each other. [5]

It is also here it has got its symbol from. The symbol consists of Harald Blåtands initials, H and B. But instead of using normal letters, it uses Nordic runes.

The biggest security feature Bluetooth has is its short range. It makes it much harder for hackers to access it, compared to your internet connection for example. This is why the only real place Bluetooth hacking takes place is in public places with a lot of devices. [6]

In general, Bluetooth security is not something to worry about. And if you want to be extra safe you can set your device on hidden mode. Then will no other Bluetooth device be able to find it.

There are of course some cons with Bluetooth, but they are for the most part overshadowed by the pros. Here they are;

I hope this article has shed some light on how Bluetooth works and what it is. As well as make you realize how often most of us use Bluetooth in our everyday activities.

If you want to learn more about network technology check out my Router vs Modem – What’s the difference.