What is Ethernet & How It Works

Ethernet is the communication protocol technology that connects devices in a network using a physical connection. 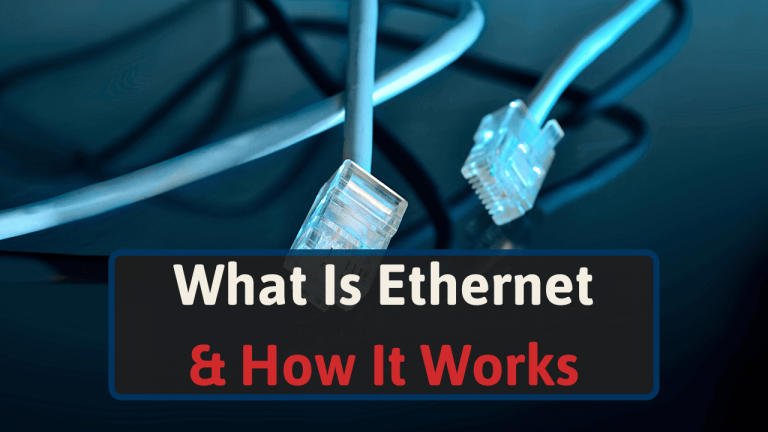 As a network engineer I work a lot with Ethernet and chances are you have to some extent too. But what is Ethernet and how does it work?

I will answer that question as well as much more, so keep reading.

Ethernet or protocol IEEE 802.3 as it’s really called, is one of the most used standards for data communication in and between networks. Ethernet is mostly used in local area networks (LANs) but is also used in wide area networks (WANs). [1, 2]

The thing about Ethernet is that it is not wireless like WI-Fi. Ethernet only uses cables to connect different devices with the network.

It’s hard to understand the ethernet if you don’t understand the internet as a whole, coupled with a bit of computer science. I will however try to explain it in a simplified manner.

The Ethernet protocol works within both the physical layer (layer 1) and the data link layer (layer 2 ) on the Opens System Interconnection (OSI) network protocol model. [3]

The physical layer is the application layer, it allows you to download data from a browser. When you enter a query in the browser this forwards to the next layer.

This request comes in a form called a data packet. This packet stores the data about the web address. This information is then sent through all the seven layers back and forth, being unpacked and packed.

The Ethernet, in short, handles what happens for the packet at layer 1 and 2.

There are some pros and cons with both Ethernet and Wi-Fi, which depends on your particular circumstances. Here is an overview of those pros and cons.

Ethernet connections are both more reliable and faster than Wi-Fi connections. This is because Wi-Fi has a lot of interference like walls, furniture, and other radio waves that make the signal less reliable and slower. Ethernet, however, has none of these problems.

When it comes to connection range the Wi-Fi beats ethernet. This is because Ethernet has the cable length as its limiting factor. And if the cable is too long the signal gets weak. [4]

To get past this you need to use a switch that will strengthen the signal again and allow for another cable to connect. Even if Wi-Fi also has its signal as a limiting factor. It will usually have a longer range than the Ethernet cables.

Wi-Fi is much more practical than Ethernet. This is because Wi-Fi is wireless, and therefore you don’t need to draw any cables when connecting a device. This makes it easier to move and change devices.

Furthermore, all devices don’t even have ethernet ports, like mobile phones or tablets. So if you are handling many devices Wi-Fi is superior in terms of practicality.

For most people reading this, they are going to have access to both options from their router.

This is good because you can choose what type of connection your devices will have. Perhaps you want Ethernet to your computer to be able to watch movies in 4K without any buffering. But want Wi-Fi on your tablet when sitting on the sofa.

The Institution of Electrical and Electronics Engineers (IEEE) was the first to standardize ethernet connection in the 1980s. During this time, Ethernet used single coaxial cables that all devices in the network were connected to.

The issue with this version of Ethernet is that when there is a problem with any of the devices connected to the network the entire network is affected.

When multiple devices tried to communicate with each other at the same time “collisions” happened. This made it so that communication between devices only could take place one at a time.

When the twisted pair cable and switches were invented these eliminated this problem. Now the connection was able to have destinations and was not relying on the main cable. This is how the modern Ethernet network came to be. [6, 7]

Ethernet is the language psychically connected devices use to communicate with each other. Unlike Wi-Fi, it only supports wired connections.

If you are thinking about getting Ethernet because of connection issues you can check out my article on 13 ways to boost your wi-fi signal and internet speed.