WiFi 5, also known as 802.11ac, is a significant update versus its previous generation and works exclusively in the 5 GHz band but supports 2.4 GHz too. Wi-Fi 5 came out in 2013 and introduced 160 MHz channels, MU-MIMO, and speeds that rival Gigabit ethernet.

If your internet speed is up to ~500 Mbps, a Wi-Fi 5 router is an option. To take advantage of anything more than that, you will need a Wi-Fi 6 router. 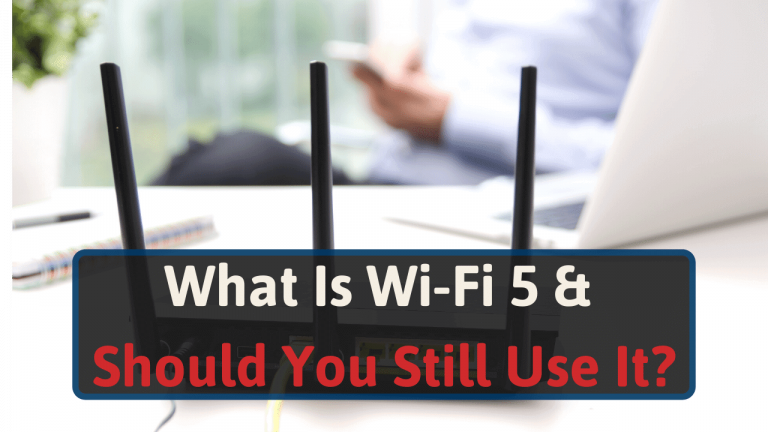 I’m Jon, a home networking enthusiast. I’ve been using a Wi-Fi 5 router and devices since 2013 and I’ve done a lot of research on it. So, I made this guide to help you understand if you should still use it.

So, keep reading to learn all about Wi-Fi 5.

Wi-Fi 5 may no longer be the latest and the greatest. But it’s still the most widely available technology for end-users, by far.

The 802.11ac standard was renamed Wi-Fi 5 by the Wi-Fi alliance in 2018. It achieved such good speeds that it promised to be an ethernet killer. Let’s take a look at how this protocol revolutionized Wi-Fi technology. 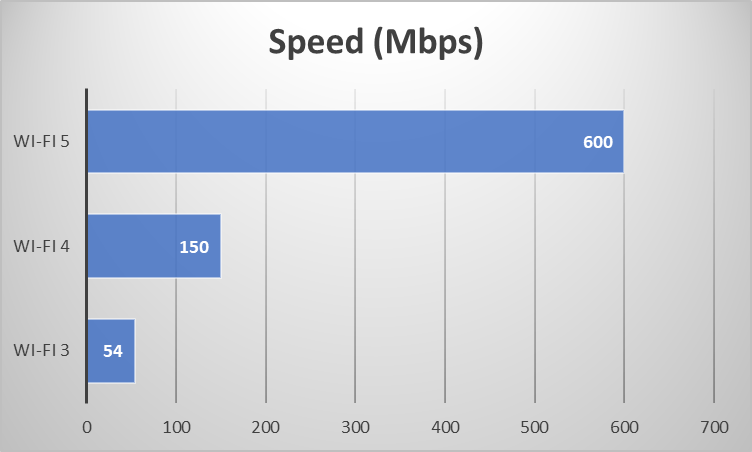 What Was New About Wi-Fi 5?

Let’s talk about what made Wi-Fi 5 so special, even by current standards, when it came out back in 2013.

It came with 2 small caveats, though.

First, both your router and client device need to support 80 MHz channels.

Second, Wi-Fi 5 only works on the 5 GHz band. But don’t think this is a bad thing. A single 80 MHz channel in 5 GHz has more spectrum than all 2.4 GHz channels! It’s also important to know that just because a device can operate in the 5 GHz band, it doesn’t mean it automatically supports Wi-Fi 5.

But once you get those out of the way, Wi-Fi 5 delivered some serious improvements to home Wi-Fi technology.

Wi-Fi 4 allows us to reach real-world speeds of 144 Mbps to 217 Mbps, which is not bad for a residential connection. But Wi-Fi 5 took speeds to new horizons.

But as we already know, it’s close to impossible to get to those speeds in real-world scenarios. A much more realistic goal is to reach around 400 to 600 Mbps. Achievable by using 2×2 and 4×4 MIMO clients, respectively.

The fastest speed we have ever got of a Wi-Fi 5 router is 518.51 Mbps, but we haven’t tested the best one in the market.

As if all of the above weren’t enough. 2016 saw the arrival of Wi-Fi 5 Wave 2. Let’s have a quick look at the features it brought along.

Remember all those nice things about 80 Mhz channels?

Now they are twice as good! Right?

Well. Sort of. Wave 2 introduced the even wider 160 MHz channels. Capable of achieving even greater theoretical speeds and increased bandwidth.

Once again, there are some caveats.

Your client devices need to support 160 MHz channels for them to work. And even if they do, 160 MHz channels are so wide that it is almost guaranteed you will have interference from your neighbors, even in the 5 GHz band.

Unless you live somewhere without anyone using the internet around you. In that case, go as wide as you’d like.

Even if you had some interference, a bad home layout, and other challenges that could reduce the throughput. Reducing it by 50% still means we are talking about Gigabit speeds.

MU-MIMO was another big feature introduced in Wi-Fi 5. Not to be confused with plain MIMO (SU-MIMO) in Wi-Fi 4. This allowed Wi-Fi 5 routers not only to use multiple antennas to increase bandwidth. But to use each antenna to connect to a different device simultaneously.

There definitely are some constraints with MU-MIMO. Mainly that your client device also needs to support it in order to work. But it opened the world to performance standards that were never seen before.

Wi-Fi 5 also introduced better beamforming performance. Meaning antennas can directly point their signal to where the client devices are. Saving you from wasting significant amounts of bandwidth.

As always, take this with a grain of salt.

Both MU-MIMO and Beamforming are highly dependant on your home layout. And things like wall materials and neighboring interference.

Wi-Fi 6 was introduced in 2019. It offers faster speeds than Wi-Fi 5, but the speed you can achieve on your home network mostly depends on the rate you get from you ISP.

The most significant update with Wi-Fi 6 is its ability to handle more devices on your network. It also has some improvements in security, latency, and uplink MU-MIMO which allows routers to communicate with multiple devices simultaneously during downloads and uploads.

Even though its been out for a for years, many devices are not yet Wi-Fi compatible (although many are). I only recommend getting a Wi-Fi 6 router if you are upgrading your router anyway, have many smart home devices, or you just want to upgrade.

Read our Wi-Fi 5 vs. Wi-Fi 6 guide for additional information.

If you’re considering upgrading to a Wi-Fi 6 router, consider Wi-Fi 6E too. Wi-Fi 6E is the “extended” version of Wi-Fi 6. It has even faster speeds, lower latency, better securit, and an entirely new frequency band– 6 GHz.

But, most wireless devices don’t support 6E yet and it costs a lot more than a Wi-Fi 6 router. At this point, I only recommend getting a Wi-Fi 6E router if you want to future-proof your home network, have fast speeds from your ISP, use lots of wireless devices, and/or have the money to get it.

In most cases, Wi-Fi 5 works well for gaming. But, if you are experiencing lag or latency issues with face-paced online games, a Wi-FI 6 router may help.

Of course, make sure you’re getting adequate Internet speed from your ISP too.

Even in 2022, when Wi-Fi 6 has already been out for a couple of years, Wi-Fi 5 is still more common. You can get some great deals on Wi-Fi 5 routers, and they will more likely than not be plenty for average home usage.

They are still a great option if you the internet speed from your ISP up to ~500 Mbps. Not to mention, Wi-Fi 5 routers are still significantly cheaper than their Wi-Fi 6 counterparts.

If you are not looking to upgrade your router too for a very long time, a Wi-Fi 6 router might be worth the extra investment.

But from a limited budget perspective, a good Wi-Fi 5 router will go a long way and last a good amount of time, even to this day.

There are an incredible amount of devices that still aren’t compatible with Wi-Fi 6, anyways.

Wi-Fi 5 was revolutionary, even by today’s standards. Chances are that your home internet will not even be able to use all the bandwidth it offers. Plus, most modern client devices like cellphones or laptops are not still compatible with the full capabilities of MU-MIMO.

However, it has become increasingly affordable. So, if you are looking to buy a new router today, you should definitely aim to get at least a Wi-Fi 5 device.

But if your thing is to always have the latest tech or your home has lots of wireless devices, a Wi-Fi 6 router is what you’re looking for.