What is Wi-Fi 6E? – The Ultimate Overview

Wi-Fi 6E is the newest Wi-Fi standard and the first to support the 6GHz band. It has faster download speeds and more bandwidth than previous Wi-Fi standards, but worse range.

If you have a Gigabit Internet plan from your ISP or over 50 smart home devices, you should consider a Wi-Fi 6E router. Otherwise, a Wi-Fi 6 one should be good enough. 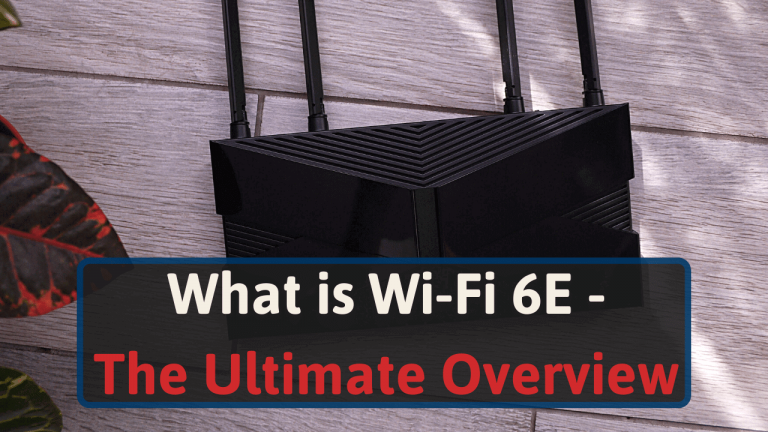 As a Network Engineer, I have done the legwork and research to give you the information you need about Wi-Fi 6E.

That means you’ll be able to make an educated choice when deciding if Wi-Fi 6E is right for you.

To learn what Wi-Fi 6E is, why it’s important, and more, keep reading. Who knows, you might learn something.

The E in Wi-Fi 6E stands for extended, which is precisely what it does. It is an extension of the Wi-Fi 6 standard that makes use of a new frequency band– 6 GHz, which supports Internet speeds over 1 Gbps.

Wi-Fi 6E offers amazing wireless speeds, which it accomplishes by using more channels. Not only is Wi-Fi 6E fast, but it also reduces interferences on your network.

Plus, you’ll have more ways to connect your favorite smart devices to your network. As a result, devices that need more bandwidth will have the capacity they need.

With this type of access, we’re sure to see more sophisticated networks using the new standard.

New and exciting features came to light with the release of Wi-Fi 6. A few of these features included better performance and higher speeds.

Wi-Fi 6E takes these features and builds on them. For example, adding the 6GHz band means more available channels.

If 2.4Ghz is a two-lane road and 5GHz is a four-lane highway, 6GHz is an eight-lane superhighway, which means you can access higher speeds and handle more traffic (bandwidth).

That means 6GHz networks are much harder to hack. As a result, your Wi-Fi 6E network is more secure than ever before.

Along with improved security, Wi-Fi 6E has many added benefits over previous Wi-Fi standards, including:

The most significant benefit of Wi-Fi 6E is its ability to always deliver high speeds. Faster speeds result from the amount of bandwidth the 6GHz band has to offer Wi-Fi 6E devices.

These devices have dedicated channels on the 6E spectrum.  However, Wi-Fi 6 devices have to share with legacy Wi-Fi 4 and 5 hardware.

Wi-Fi 6E is also ideal for smart homes with lots of IoT devices. This is due to its higher capacity, faster speeds, and less network interference. [2]

That means you can put your smart devices on the same network and not have to worry about congestion or security.

Finally, Wi-Fi 6E would be a huge help to remote workers. Teleconferencing and streaming content for work would have its own dedicated network.

That means you won’ts have to worry about your meeting buffering while someone else streams a movie.

Wi-Fi 6E handles all these situations and more. Healthcare, remote work, and education are just a few examples of use cases for Wi-Fi 6E.

Along with faster speeds, supporting more devices, and the extra band, Wi-Fi 6E also has lower latency. This comes in handy for online gaming, video conferencing, and more.

Wi-Fi 6E is still a relatively new Wi-Fi protocol, and it has some downsides.

Many wireless devices and routers have yet to adopt Wi-Fi 6E.

Sure, you can purchase a Wi-Fi 6E router now. But if your laptop, smartphone, smart TV, smart home sensors, etc. don’t support it, you won’t have access to all the improvements it brings to the table.

6GHz band has a short-range

For starters, the 6GHz band does not provide the range supported by 2.4GHz and 5GHz spectrums. Along those same lines, it is more susceptible to physical obstructions.

These include items such as trees or walls the come between the router and the device.

These users include mobile broadcast links for television and point-to-point microwave links.

As a result, Wi-Fi 6E controls need to be in place to keep access points from causing problems. This enables user permissions.

One other drawback that could potentially impact the adoption of Wi-Fi 6E is cost.

Routers that support Wi-Fi 6 are more expensive than their Wi-Fi 5 counterparts. As a result, it’s expected that 6E routers will be even more costly.

However, as with most new tech, those prices will drop as Wi-Fi 6 and 6E become a larger part of our everyday lives.

Wi-Fi 6E is definitely an improvement for online gaming because it offers faster speeds, lower latency, and has the dedicated 6 GHz band. Assuming your gaming computer or console is Wi-Fi 6E compatible, it can help you in fast paced online games like an FPS.

But, if the speed from your ISP is slow, Wi-Fi 6E won’t make too much of a difference.

Should You Upgrade to Wi-Fi 6E?

If you have lots of smart home devices (50 or more) and/or have a Gigabit Internet plan from your ISP, Wi-FI 6E is a great option. But if not, it is probably overkill.

However, if you haven’t upgraded to Wi-Fi 6 yet, then it might make sense to purchase a router that supports Wi-Fi 6E. Doing so allows your network to keep up with the latest devices.

You can also enjoy the most recent feature upgrades. This includes faster speed, more bandwidth, better security, and more capacity.

But, bear in mind that it will take time for the market to catch up with any technological leap.

This is especially true as users are holding on to their laptops and smartphones longer than ever before.

Regardless, having a Wi-Fi 6E router means you’ll be ready to handle any challenge thrown at you by internet-connected devices of the future.

Whether it’s more smart home devices, high-resolution content, or faster Wi-Fi speeds, your home Wi-Fi 6E network can handle it. So bring it on!

Wi-Fi 6 is the newest Wi-Fi standard. And with that comes the best performance but also high costs.

Primarily for people who want the best of the best, but not necessary for most.

If you are interested in getting a new router, check out the best routers for your ISP hub.