Wi-Fi 4, formerly known as the 802.11n Wi-Fi standard, was first introduced in 2009. It was the first time we saw MIMO capabilities, and many other innovations.

If your internet speed is below 150 Mbps, you can still get away with using a Wi-Fi 4 router. Anything above that bandwidth gets wasted unless you upgrade to a Wi-Fi 5 router. 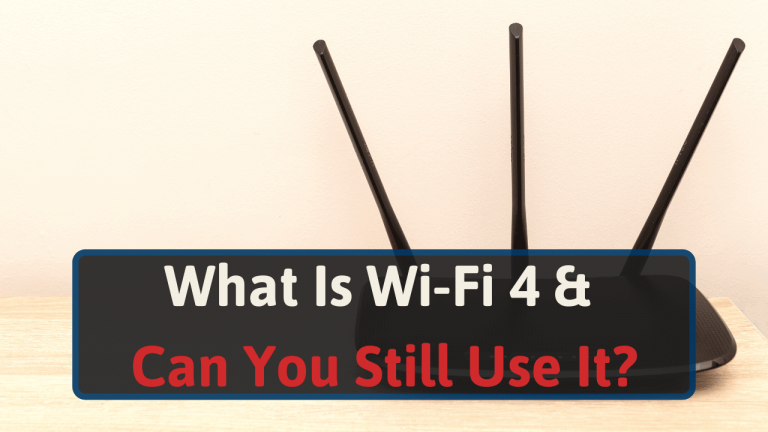 If you’re thinking, I don’t remember a Wi-Fi 4 back in the day. You’re not wrong!

It was an important step for Wi-Fi technology that introduced many of the features we still use today.

Let’s have a closer look at what the 802.11n standard was all about.

Let’s Go Back in Time

Back in 2008, things were starting to get tricky. The current standard then, 802.11g, kept facing many challenges.

It was introduced back in 2003 and is limited to the 2.4GHz band. But as more and more devices became Wi-Fi capable, interference started to become a noticeable problem.

Not to mention, commercial internet speeds were starting to pick up. Meaning 802.11g’s 54 Mbps maximum speed was starting to lag behind.

The introduction of Wi-Fi 4, formerly known as 802.11n, brought some serious advantages to Wi-Fi technology [1]. Most of them are still very important in today’s world.

In short, the main goals of the new standard were:

But that was easier said than done. The previous Wi-Fi standard was unable to achieve some of these, partly due to the limitations of how radio signals work in general.

So, some clever “workarounds”  were needed to improve its performance.

Let’s take a quick look at the main features this standard offers:

Even though dual-band technically existed earlier, Wi-Fi 4 brought the standard to consumer routers.

The 5 GHz band was still rarely supported by client devices, but the 2.4 GHz band was getting too crowded and slow.

The 5 GHz band is much wider. By having more room to work with, it’s easier to avoid interference and achieve faster speeds.

For a bit of context, the 2.4 GHz band only has 3 non-overlapping channels. While the 5 GHz band has more than 20.

And by having the option to use both, Wi-Fi 4 was crucial in helping users adopt the newer, faster band.

Wi-Fi 4 brought along the use of multiple antennas for the first time. At least for home routers.

It meant the router could send more than one signal at the same time.

As you can imagine, this significantly increased bandwidth. You could use the same amount of spectrum while sending 2, 3, or 4 times more data. Depending on how many antennas your router had.

The caveat here was that your client devices also needed to support MIMO. Which wasn’t very common back in 2009.

Theoretically, you could achieve 300 Mbps with Wi-Fi 4 [2]. But as we’ve come to learn, theoretical speeds are hard to achieve. And by hard, we mean impossible.

But it still brought a significant advantage over its predecessor. In identical scenarios with the usual 20 MHz channels, Wi-Fi 4 was able to achieve 72 Mbps vs. 54 Mbps in Wi-Fi 3. 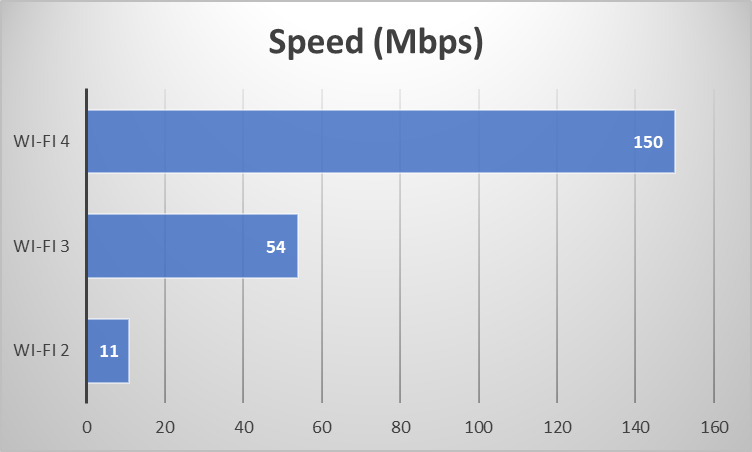 But once you started using those extra antennas, speeds around 150 Mbps were definitely achievable. Pretty good back in 2009!

Wi-Fi 4 made channel bonding possible for users. For the first time, routers were able to bond the usual 20 MHz channels into wider, 40 MHz ones.

It wasn’t all fun and games, though. Because of the limited amount of 2.4 GHz channels, only a single 40 MHz channel could be configured. And it was sure to interfere with other signals if you have neighbors, which most of us do.

If I may be totally honest, I have a confession to make. I’m still using the modem-router combo my ISP provided. I got it from them in 2021. And guess what? It’s Wi-Fi 4.

In this day and age, home Internet speeds are far above the usual 150 Mbps maximum of Wi-Fi 4. If that is your case, make sure to upgrade as soon as possible.

Otherwise, you are wasting your hard-earned dollars paying for bandwidth you are incapable of using.

Chances are that if you have more than one laptop and a smartphone, you’ll be better off upgrading to at least a budget Wi-Fi 5 router.

Wi-Fi 4 was definitely a game-changer. It was the base for all the great Wi-Fi innovations we have seen in the last decade. It was so good that many people still use 802.11n routers even in 2021.

And by some people, I mean me.

If you’re in the same boat, make sure to take advantage of all the great features Wi-Fi 5 and Wi-Fi 6 bring along. It’s as easy as replacing your router!

I know I will.