What Is a Guest Network & Why You Need It?

Guest networks are a router feature that allows you to share your internet connection without exposing your password, network, or devices. It allows your guests to connect to a separate connection with a different password. This way, your personal network is never compromised. 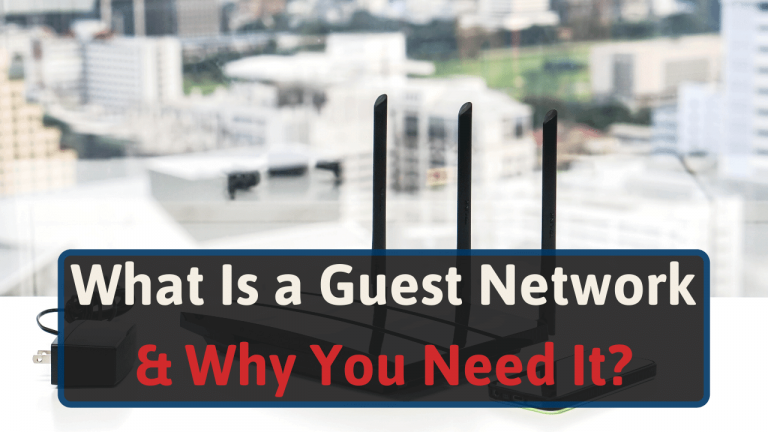 But it’s not only malicious intentions that can be a problem.  Over the years, we’ve seen a lot of different scenarios where guest networks can come in handy.

Let’s explore all the benefits guest networks provide. And a few examples of why we should use them.

What Is a Guest Network?

A guest network is a separate connection to the internet, using the same router as your primary connection.

It’s called a “guest” network because it is usually limited in functionality. And only good to access the internet directly. Guest network users won’t have access to any other parts of your network or your router.

There is no need to pay any additional fees to anyone for this feature. Guest networks are simply a separate “door” to your network, leading directly to the internet instead of the rest of your network.

However, it’s important to know that not all routers support the guest network feature. But don’t worry, it’s one of the most common features nowadays, so your router most likely has it.

If your router doesn’t have the guest network option, you might want to consider upgrading.

If it doesn’t have this basic feature, it is most likely also missing other important settings and might be lacking in security.

Guest networks are a completely different SSID, meaning you will need to connect to it separately if you wish to access it.

Usually, they are named the same as the primary connection followed by “-Guest”.

Just like above, if the guest network option is enabled, it will appear as a separate SSID on your available Wi-Fi networks list.

So, while they share the same Internet link from your ISP, they are using two completely different “doors” to access it.

What Are the Benefits of a Guest Network?

Usually, we would title this section “Do I Need a Guest Network?”. However, we think you might have prematurely said “No”.

But you might be leaving out some vital information before making that decision. So, instead, we’ll show you the benefits. Then you can decide for yourself.

This way, you can ensure you have a secure, complex password protecting your network; without the hassle of telling your friends all those capital letters or symbols.

Also, you avoid the risk of someone sharing your password without your authorization.

Security – Most important of all, they can’t access your network or router

This is the most important reason to have a guest network.

It’s entirely understandable to trust your close friends and family with your Wi-Fi password. However, you will be exposing your network through their devices even if they have no ill intentions.

If one of your friends connects to your Wi-Fi, they will have direct access to your router and the rest of your network devices.

If their devices are infected with malware for some reason, even without their knowledge, it could quickly spread to other devices in your network.

A lesser-known benefit of guest networks is that you can use them as a secondary network for smart devices.

Smart gadgets constantly need to “check in” with your network to make sure they’re connected. Meaning they could clog up your network as they add up [1].

I’m up to about ten smart bulbs and five smart plugs at this point. That’s a lot of devices using my network in addition to all the computers, cellphones, and tablets any household might have.

Having these smart devices connect to your guest network frees up valuable space, so your main devices operate flawlessly.

Plus, the smart devices themselves will work more consistently and have better uptime with a dedicated network.

Additionally, smart devices like bulbs and thermostats are known to be easy targets for attackers. As they can be more vulnerable than the rest of your devices. So having them on a separate network is always smart [2].

How Do I Set Up a Guest Network?

You will most likely need to access your router settings to configure a guest network. However, some newer or higher-end routers might have dedicated apps that make the setup super easy.

If your router doesn’t have an app. Don’t worry. Accessing your router settings is easier than you think.

The most common way to access your router’s settings is to open a web browser (like Edge, Chrome, or Firefox) and enter your router’s IP address.

So, that was easy. But what if you don’t know it?

The good news is that it is probably one of these two; feel free to type them out:

Did that work? Great! If not, well, that’s the bad news.

If it’s not one of those two, it could be anything. But don’t worry; you can use this site to find your router’s IP. Simply select your router’s brand and then the model from the drop-down menu.

It will show you both your router’s default IP address and its default username and password, which we needed anyway.

Now, just browse to the IP address listed and enter the username and password.

The rest should be pretty self-explanatory. Also, it would be hard to explain as all routers have different user interfaces. But it should be pretty easy to find the “Guest Network” option in the main menu or under “Wireless”.

A guest network not only shields your devices and router from any device you connect to it, but also helps you keep your network devices organized.

If your router doesn’t support the guest network feature, it’s most likely getting older. It would be worth exploring upgrading it.

And in case you need a little more help accessing your router, you can follow this guide.