What is a Router & How It Works

A router is a network device that facilitates communication between your own devices by telling data where to go. It's also responsible for creating and connecting your home network to the internet. Routers are also often responsible for broadcasting your Wi-Fi signal. 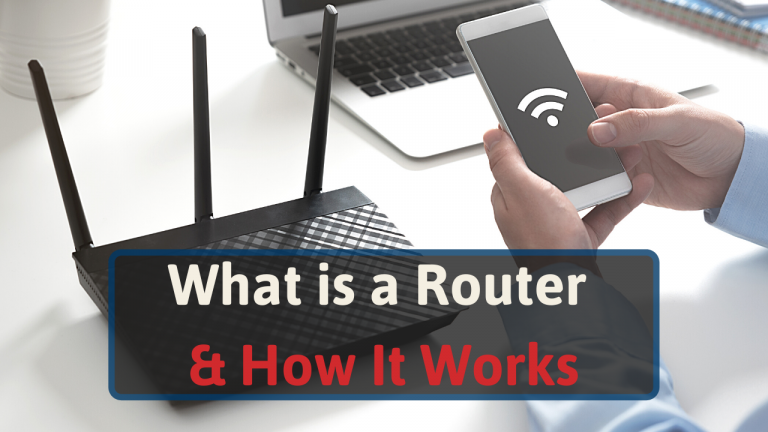 When I get this question at work, I usually answer with the above. But the truth is that a router does much more.

In this article, we will go over the ins and outs of routers and their functions.

So, sit tight, and let’s get right into it.

Here are the main functions of a router.

A router allows your devices to communicate with each other. For example, computers connected to the same router can share files between them without using the Internet.

Another good example is a single network printer servicing all computers connected to a router, which is common in offices.

Routers are also responsible for assigning IP addresses to your devices.

An IP address is what helps your devices find each other on your network. It’s also used for connecting them to the internet, but more on that later.

A router does not only allows you to connect to the Internet but also works as the first line of security in your home network.

No surprise here. Since your router connects to all the devices in your network, its security is essential.

Routers also calculate the best path for your data packets to travel. Resulting in faster and smoother data transmission.

They do this both for your home (local) network and external networks like the Internet.

The Internet is the best example of routers in action. And understanding how the internet works is a great way to understand routers.

The Internet is a network of networks. In other words, it’s a web of servers and computers connected between each other all over the world.

Sending data over the Internet is very similar to sending a letter across the country.

To send a letter, we usually do the following:

1. You write the recipient’s address and the return address on the envelope.

2. The letter gets picked up by the mailman.

4. Once close to its destination, it gets handed to another mailman.

5. The mailman delivers the letter to the recipient’s address.

The same process happens when sending data over the Internet, and routers are the mail carriers.

Your router assigns your network, and all of your devices, their own IP address.

When you send data, IP addresses work just like a home address.

Your router hands the data and its recipient address to the Internet. Then, it will find its way to its destination using other routers as “distribution centers”. Which helps the data travel the most efficient way possible.

In short, a router is a gateway (mailman) between your data (a letter) and its destination. [1]

All routers have the same primary function, but there are different types of routers that you can use depending on your needs. Here are some of the most common ones [2]:

You probably don’t only know what a wireless router is, but own one.

These are the most common type of routers by far and are used in home and office networks worldwide.

Wireless routers generate Wi-Fi, which allows our devices to connect to local networks and the Internet without physical cables.

But even though they are called “wireless” routers, they also provide regular ethernet ports to connect up to 5 devices (depending on the model).

Core routers are used by ISPs (Internet Service Providers) and can only route data in local networks. Meaning they don’t go out into the Internet.

By focusing only on local networks, core routers offer a level of performance above other types of routers. Because of this, they are most common in major or large-scale local networks.

An edge router, sometimes referred to as an access router, is placed just where the name implies. It operates on the “edge” of the network and facilitates communication between internal and external networks.

In short, its job is to connect you to remote networks using the internet.

Distribution routers receive data from edge routers through wired connections. Then, it distributes data packets to their specific destinations.

They can do this both through Wi-Fi. Or, less frequently, through ethernet cables.

Virtual routers are software programs that function as a router. They live and work in the cloud, so the entry cost is lower than buying a physical device. Plus, it offers much more flexibility and easier scaling.

Virtual routers are mainly used by big businesses with complex networks as they are easier to maintain and upgrade.

A dual WAN router has two WAN (wide area network) ports instead of just one.

With this type of device, you can have two different ISP’s connected to the same router. If one of them happens to have an outage, the router automatically switches to the other ISP.

Dual WAN routers are primarily helpful for businesses where 100% Internet uptime is essential. [4]

As a network engineer, I get all sorts of questions regarding routers. Here are the most common ones I encounter regarding home networks specifically:

How far can wireless routers reach?

But this will depend on the router model. Budget routers typically have less range than premium ones.

Not only that, but other factors such as walls, stairs, roofs, and furniture can degrade a router’s signal. Depending on their thickness, some walls can even reduce indoor range by up to 80%.

How many devices can connect to a router simultaneously?

Regular consumer-grade wireless routers can support up to 250 devices, including computers, phones, tablets, and more.

That is impressive. But you probably shouldn’t connect 250 devices to your home network unless you have a super-fast connection.

How much should I spend on a router?

Home routers can go anywhere from $10 to $500, but how much you should spend mostly depends on your Internet connection and amount of devices.

If you have high-speed Internet and a lot of devices, spending $250 on a router might make a lot of sense.

On the other hand, if you have just a regular Internet connection, you could achieve excellent performance for as little as $100.

In general and for most people, there is no need to go beyond the $200 mark.

If you happen to be in the market for a new router, check out our best router for your ISP guides. They cover all major ISP’s and what routers work best with each one.

Routers are the mail carriers of the Internet. They help transport data packets to and from their destinations.

Without a router, communication between your home network and the Internet would be impossible.

As with anything else, you get what you pay for with routers. However, there’s no need to spend several hundred dollars to get great performance.

2 thoughts on “What is a Router & How It Works”