Router Vs Modem – What’s The Difference?

A modem allows you to send data over the internet in language communication lines (like phone lines and cable TV) can understand. A router tells the data where to go and how to get to its destination. 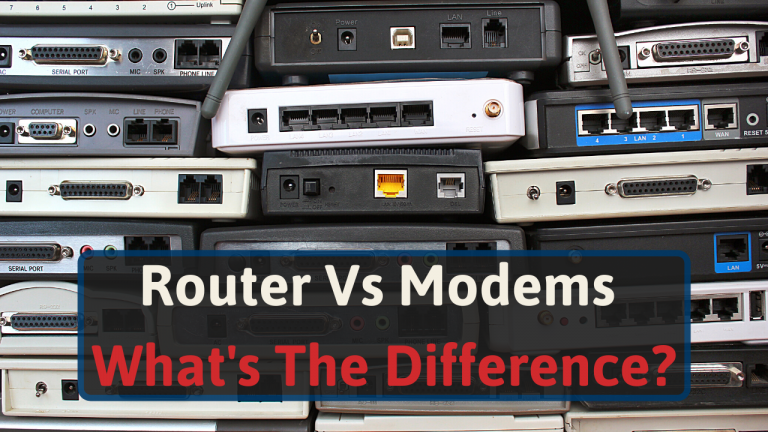 If I had a penny for every time someone asked me why we use two routers to set up networks, I’d have a lot of pennies!

I always need to explain that it’s not two routers we’re using, but one modem and one router.

But, how are they different? They certainly look alike.

Let’s explore this topic and other details that will help you set up the best home network possible.

What Is a Modem?

Modem stands for “modulator-demodulator”, and its job is to convert analog signals from your ISP into digital signals your computer and other devices can understand. Then, it does the reverse when sending information back into the Internet. [1]

There are many different types of modems. But essentially, they all work the same way.

The two most common types of modems are:

A DSL modem uses telephone lines as a medium of communication between your ISP (the Internet) and your home.

The advantage of DSL modems is that the phone line infrastructure is already in place and ready to use. Meaning DSL Internet is usually cheaper and more convenient to install.

It was also considered a great option compared to dial-up Internet because it is not affected by phone calls or peak usage times.

The drawback is that because phone lines don’t have much bandwidth, DSL Internet is usually slower than cable Internet, which we will explore next.

A cable modem connects to your ISP and the Internet using television’s coaxial cables.

Here, the pro is that coaxial cables have much more “room” for data to travel, meaning Internet speeds are usually faster.

The con is that since television cables are shared with the rest of your neighborhood, peak usage times result in degraded Internet speeds and performance.

That covers the most basic aspects of modems. But if you want to learn how they work in more detail, make sure to check out this article, where we go over a lot more.

What Is a Router?

A router is a device that forwards data packets to and from their destination. They help data travel both in your home network and out into the Internet.

You can think of routers as the “distribution centers” of the Internet. It’s the device that makes communicating with the Internet possible.

As mentioned above, routers also enable communication between your own devices, like your computer sending a print job to your wireless printer.

Routers also serve as firewalls and will protect your network from outside security threats, like stopping unauthorized people from accessing any of your devices. [2]

If you want to learn more about routers and how they work, check out this article where we discuss them in more detail.

The two most common types of routers for home use are:

A wired router is a device that distributes your Internet connection through ethernet cables. These routers usually have between 4 to 8 ethernet ports available.

If you need to connect more devices than that, you will need either a network switch or an additional router.

A wireless router is a device that distributes your Internet connection without any cables.

Plus, since you are not limited by the number of ports, you can connect more than six devices. It’s common for wireless routers to support up to 250 devices!

Do I Need Both?

Technically, no. But since modems usually have a single ethernet port, you will need a router to connect more than one device to your network.

Modems have a single port because they actually expect to be connected to a router.

So, you don’t necessarily need a router. But if you don’t have one, functionality can be pretty limited.

However, there is an exception to this rule: Modem-Router combos.

Gateways enable you to use a single device for both modulation and communication, saving some space and the need for that extra ethernet cable.

As a network engineer, I always recommend having separate devices—one modem connected to a router via an ethernet cable. I would suggest you do the same.

The main reason is that router technology moves way faster than modem technology. By having separate devices, you have the flexibility to upgrade your router without spending on a new modem.

But this is a performance-focused opinion. If you value convenience and simplicity over performance, you’ll do just fine with a gateway covering both tasks.

It really comes down to personal preference. If you’d like to learn more about the pros and cons of each device, check out this article.

Should I Rent or Buy My Modem or Router?

You will find that most ISPs will try to rent out network equipment. Prices are usually around $10 a month, but can be even higher.

There are some benefits to renting, but it’s not always the best option.

If you want to get into the nitty-gritty, you can refer to our article covering this specific scenario.

For now, let’s look at the most prominent pros and cons:

Short and simple, we think you should buy your own modem and router. The main reason being it will be significantly cheaper in the long run.

There is a reason ISPs offer renting as the first option and usually push you towards that decision: they make a killing from it.

They usually buy cheap/subpar devices from China and rent them to you at outrageous prices.

But don’t take my word for it. I can also be biased. I do make a small commission from devices you buy using our referral links. So keep that in mind.

But if you run the numbers yourself, you will probably arrive at a similar conclusion.

In short, a modem takes analog signals from your ISP and converts them to digital signals your devices can understand. And vice-versa.

A router works as a distributor, sending each data packet to its intended destination. Without packets coming and going, there would be no way to connect to the Internet.

If you happen to be on the market for a new modem or router, check out our buying guides: