DOCSIS 4.0 is the next generation of Data Over Cable Service Interface Specification (DOCSIS). It is a new broadband technology that supports lower latency, better security, more connected devices, and much faster speeds compared to DOCSIS 3.1. 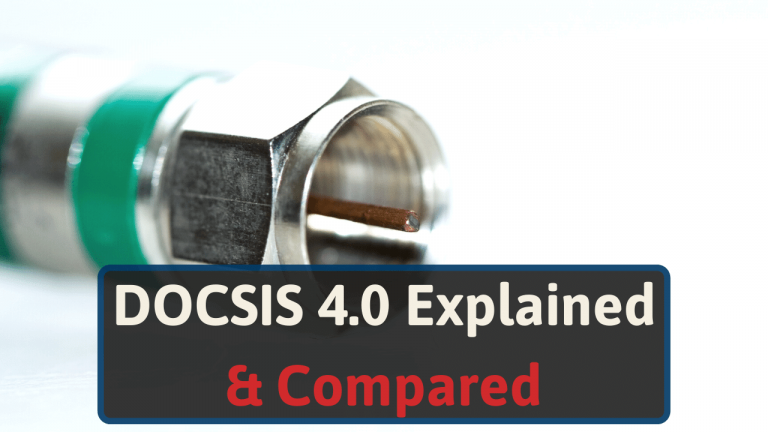 I have read the DOCSIS 4.0 whitepaper, so you don’t have to.

Read on as I explain what DOCSIS 4.0 is and how it differs from the previous standards.

DOCSIS 4.0 is the upcoming version of Data Over Cable Service Interface Specification (DOCSIS). The new and improved 4.0 version is entering the broadband market after long-term testing and certification.

This upgraded technology is capable of supporting the next generation of hybrid fiber coax (HFC) networks. DOCSIS 4.0 will further enhance communication efficiency. It combines exceptionally high speeds and flexibility with a boosted data-carrying capacity on a Full Duplex DOCSIS 3.1 network.

Why is DOCSIS 4.0 Important?

As of now, the average broadband customer’s upstream data consumption is only 10% of their downstream consumption. So, why is large upstream and downstream capacity important?

Well, with new technology and applications, you will likely use more advanced capabilities in the future. For example, sharing interactive high-resolution video, which requires not only a large downstream capacity but a large upstream one too.

With DOCSIS 4.0, your network will be able to support the upstream and downstream speed and latency requirements you need.

When Will DOCSIS 4.0 be Available?

At the time of writing, DOCSIS 4.0 technology isn’t available. The initial products aren’t expected to appear until sometime in 2022. Deployments will follow in the years after the release.

The path to DOCSIS 4.0 is more complicated than its predecessors. This is because it supports both Full Duplex DOCSIS (FDX) and Extended Spectrum DOCSIS (ESD)/Frequency Division Duplex (FDD). [2]

The dual compatibility has forked the path to some degree, leading to almost double the work and testing to validate it and iron out any bugs.

DOCSIS 4.0, 3.1, and 3.0 are the most recent releases of the DOCSIS technology. DOCSIS 4.0 technology has yet to appear for the general public’s use, but most internet users have been using DOCSIS 3.0 and 3.1 for many years.

If you’re interested in DOCSIS 4.0, you might be wanting to learn more about the DOCSIS standard. DOCSIS technology is an international telecom standard that enables high bandwidth data via a preexisting cable television system.

Telecom operators can use established hybrid fiber-coaxial (HFC) networks to supply consumers with internet services. CableLabs developed the standard specifications in collaboration with multiple other companies, including:

Although DOCSIS 4.0 modems haven’t been released to the general public yet, their specifications went public in 2019.

DOCSIS 3.0 is one of the earlier versions of the technology. Specifications were initially released in 2006, which build on the foundation of its predecessors.

Although the first specs were released in 2006, it wasn’t made available to the public until 2008.

The primary highlights of DOCSIS 3.0 include the increase of capacity and efficiency compared to previous versions.

DOCSIS 3.0 is one of the older versions of the technology, which has since been upped by the 3.1 and 4.0 (upcoming) versions.

The 3.1 version is built off the offerings of DOCSIS 3.0, so there are considerable changes between the 3.0 and 4.0 technologies.

Comparatively, they’re much higher in DOCSIS 4.0 with downstream of 10 Gbps and an upstream of 6 Gbps.

DOCSIS 3.0 is still in use by many networks. However, it may become obsolete in the near future.

DOCSIS 3.1 followed the 3.0 version, with initial specs released in 2013 and made available to the public in 2016. Again, the upgraded version offered considerable advancements from its predecessor.

The 3.1 version provided significant capacity and efficiency improvements. It also added the use of OFDM and wideband channels.

DOCSIS 3.1 and DOCSIS 4.0 share several similarities. DOCSIS 4.0 technology branches off the existing foundation of DOCSIS 3.1, yet it adds several features to advance the future of the internet.

For example, DOCSIS 4.0 offers better reliability and increased security. It has a higher upstream capacity of 6 Gbps compared to 1-2 Gbps on DOCSIS 3.1.

With the new caliber of DOCSIS set to come out in 2022, you might be wondering which is best. DOCSIS 4.0 hasn’t yet hit the market with widespread availability. But since it’s an improvement over 3.1 in every regard, it is better.

DOCSIS 3.0 and 3.1 are already here, but even these two standards are different and can change how you use your modem. The option of the three that’s better ultimately falls to your internet needs.

For example, if you’re happy with your current internet speeds and only a few devices are using the same network, DOCSIS 3.0 may be sufficient for your needs.

However, it’s essential to recognize that DOCSIS 3.0 will become obsolete some time in the future. So, when your ISP implements DOCSIS 3.1 completely, your DOCSIS 3.0 modem will cease to work. But it may take a long time before the switch actually happens.

Suppose you have several devices drawing from the same network, such as a few computers, a media server, and a couple of additional devices (phones, tablets, etc.). In that case, you may find the extra bandwidth of DOCSIS 3.1 or 4.0 a better choice.

When it is finally available, DOCSIS 4.0 will be the ideal choice for scenarios that require higher upstream speeds.

For example, if you regularly participate in video conferences or remote learning, DOCSIS 4.0 will be the best option. In addition, DOCSIS 4.0 will likely be a popular choice with healthcare, virtual reality, IoT, etc.

DOCSIS 4.0 is the new standard of Data Over Cable Service Service Interface Specification. It is will be released in 2022 and has many improvements over the previous standard, DOCSIS 3.1.

DOCSIS 4.0 has better latency, faster upstream and downstream transmission. Plus, it can handle multi-gigabit speeds.

If you want more information on how DOCSIS 3.0 and 3.1 compare, check out our guide here.